A World Conference against Racism is to be held again in Durban South Africa. The previous one held in 2001 proved to be another event in which Israel was the sole country to criticized. This year's proves to be going the same route. Only three countries have pulled out of this anti-Semitic feeding frenzy: Canada, the United States, and Israel.

In the face of this obsession, who today stands with the Jewish people? Who amongst the leaders of today is prepared to wear the Jewish star? At the UN Human Rights Council, there is one state which votes consistently against the anti-Zionists - Canada. To take an example, the Human Rights Council in January 2009, at one of its many special sessions directed against Israel, passed a typical Israel bashing resolution, this time about Gaza. The vote was 33 in favour, 13 abstentions, and only one opposed. That one was Canada.

The World Conference against Racism held in Durban South Africa in September 2001 in a concluding document which was supposed to be about racism instead criticised one country alone, Israel. The Durban review conference, scheduled for April this year in Geneva, bears all the hallmarks of repeating that travesty. There are only two states besides Israel which have pulled out of the Review conference to avoid participating in and legitimizing that echo of Durban 2001, Canada and the United States. Canada left first, in February 2008, even before Israel did. The United States just announced it was pulling out a few days ago.

THIS CANADIAN record has drawn the attention of the world's anti-Zionist states. When the Canadian human rights record came up for consideration at a Human Rights Council working group in February under the Universal Periodic Review, Algeria, Syria and Iran tore into Canada for its refusal to kowtow to the anti-Zionist agenda.

During World War II, there are legends about two leaders who sided with the Jewish people:

Two urban legends about the yellow star are commonly told. In one, French Vichy officials during World War II gave Moroccan authorities yellow stars for the Jews of Morocco to wear. King Mohammad V asked for a dozen more, explaining that he wanted them so that he and his family could wear them.

In another, the Nazi German occupying forces in Denmark issued a decree that all Danish Jews must wear a yellow armband with the star of David. King Christian in response answered that he would wear the first star of David and expected every other Dane to do the same.

Both leaders did support their Jewish communities, but not necessarily in the way the stories depict. The first story is contested. The second story is false. But both are constantly retold because they state a fundamental truth, the importance of leadership in combating prejudice.

Wear a blue Star of David in support of Israel. Post one on your web-site. 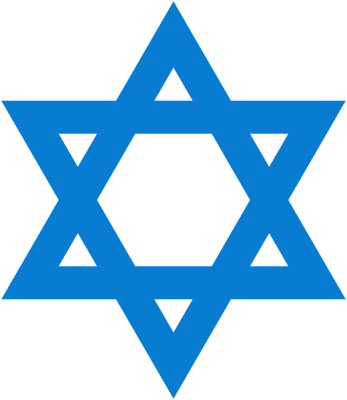 The Star of David is a symbol anyone should be proud to wear. It symbolizes our struggle for religious freedom, the very right to live, and justice.
Posted by shira at 11:33 AM