Looking at all the rebuilding and reconstruction that has happened since Katrina struck the Mississippi Gulf Coast four years, I can still recall the feeling of despondency at all the destruction Katrina caused. One of the hardest places to visit was the beach at Gulfport. This is where I spent a lot of my childhood and where I took my son when he was younger. These pictures are also from my brother's neighborhood. 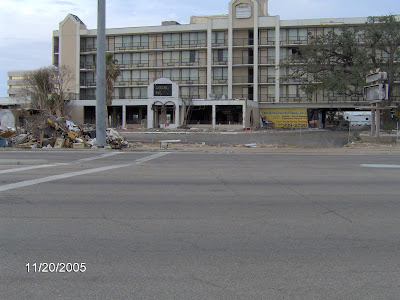 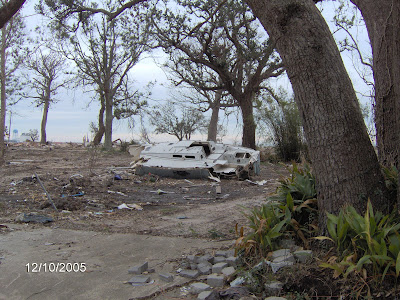 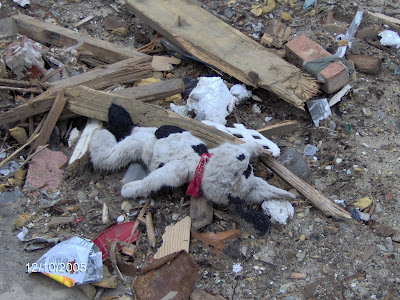 Biloxi's beach was annihilated by Hurricane Katrina. Buildings over 150 years old were just gone. Below is the harbor master's building. 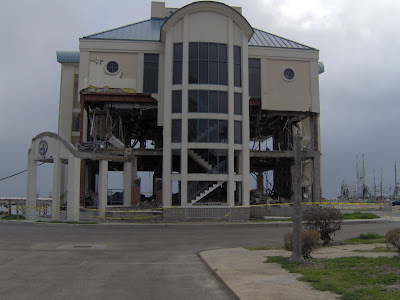 This a view from Water street in Biloxi looking toward some condominiums that have since been torn down. 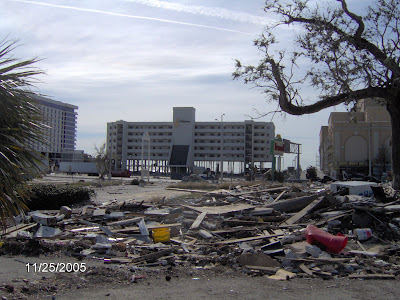 Hurricane Katrina destroyed the place I work. We've since rebuilt but this is what it looked like. 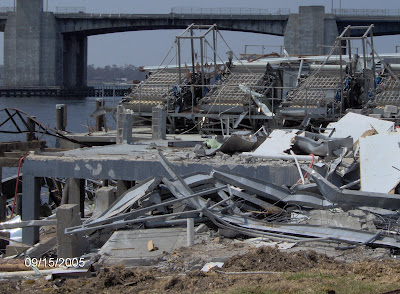 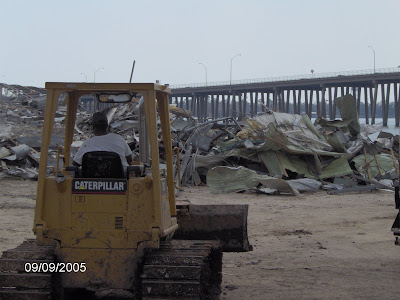 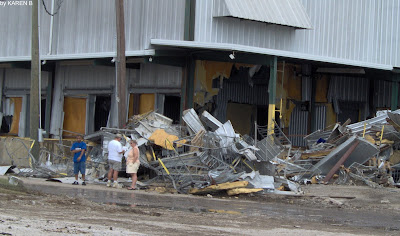 The FEMA trailers helped give shelter to those who lost their homes. 65,000 homes were destroyed in Mississippi by Hurricane Katrina. 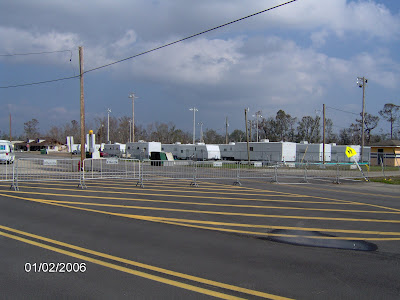 This is a photo of Bay St Louis. In front the house used to be a road. It was completely washed out by Hurricane Katrina. Bay St Louis was inundated by an estimated 24 foot storm surge. It is an estimate because many of the instruments used to determine storm surge were washed out to sea. Many feel that Katrina's storm surge was much higher.

Below are some posts I did 4 years ago:

This one was done while waiting for Katrina. It was 9 days before I could post again.

This was my first post after electricity had been restored.

This was my first trip to Biloxi after Katrina.

My first glance of where I work.

Thankful for all those who came and helped us

We are still rebuilding. I made the following video last year. I hope we and those in New Orleans continue to dance and to rebuild stronger, together.

I feel so thankful. Even though it's been hard these past four years, I thank HaShem that no one in my family lost their homes, that no one I knew lost their lives, and that things have improved tremendously. I cannot describe the joy my congregation felt as we dedicated our new synagogue in May of this year and that we will be able to have our High Holy Day services in our synagogue and not at the Keesler Air Force Base chapel.
Posted by shira at 10:26 AM No comments:

Saturday will mark the 4th anniversary of Hurricane Katrina. I've been thinking about the things I was doing and the feelings I had while we watching the weather reports.

BK (before Katrina), hurricanes to me were a source of fascination and wonder. They still are but now it is tempered by the knowledge of the great destructive powers hurricanes can hold.

If I remember correctly, I had my son mow the grass and at work, I started planning the times I would begin making computer backups.

I remember going out to take photos after work and there was this sense of urgency to take photos of everything along the beach front. It was an urgency I didn't heed.

Who could imagine everything being wiped away?

I remember the dreams I had before Katrina hit. Nightmares really of a red sky and howling winds. Having been through Frederick, Georges, and other hurricanes that came at night, I knew the skies are usually very dark with an eery glow. The glow seems to speak of the awesome power of the hurricane.

Little did I know the awesome power Hurricane Katrina was set to unleash upon the Mississippi Gulf Coast.
Posted by shira at 1:48 PM No comments:

One of the big talking points opponents of health care reform bring up is the fear of rationing. They claim health care rationing exists in Britain's and Canada's health care system. A British doctor speaks out:

Among the inflammatory charges, Sen. Edward Kennedy wouldn't have received state-of-the-art care for his brain tumor in a place like Great Britain because health overseers would have found extending the life of the 77-year-old unworthy of the expense.

"Well, I'm sorry to say that's the most ludicrous thing that I've heard," Ara Darzi, a surgeon and former minister of health, tells Steve Inskeep on Tuesday's Morning Edition. It's an example, Darzi says, of the "lies that have been used to set fear against reform."
...
"Americans fear that countries such as Britain and Canada ration care -- and that such rationing could and should never be tolerated in the United States," the Post editorial says. "Yet 47 million uninsured is quite an extreme form of rationing. So at this moment, the burden of proof falls upon those who oppose change -- for they stand in defense of fear.

Our founders were not godlike men. They had their faults like everybody. Most of the Southerners who signed the Declaration of Independence were heavily in debt. Thomas Jefferson eventually lost his beloved Monticello because of his debt. Benjamin Franklin was the 1770's Bill Clinton.

When the American Revolution was fought, we were in heavy debt. It was to the point that many other countries thought for sure the new country would totter over the brink and exist no more. France was our China back then. We borrowed mostly from them in the 1770's just as we borrow heavily from China today.

Our Founders had a great deal of courage. Throughout our country's history, we've met hardships before. There have been wars, recessions, depressions, natural disasters, and other obstacles to struggle through.

And even as our country struggled through this, we still welcomed our doors to the poor wretched huddled masses yearning to be free. Today, we tend to try to slam the doors.

Are we to be frightened of helping our neighbors? In the video, Ms. Abram states their insurance deductible if $5,000. Her family is lucky to have any coverage at all. But like many Americans, their family is going to be struggling with mounting debt as her son goes through his surgeries. Health care reform is to help her and yet she fears it because of the bugaboo word socialism.

Her and so many others should be directing their rage at the real culprits in this mess: The insurance companies.

Health care reform is needed and badly. Premiums have gone up and along side those premium increases, deductibles have gone up as have co-pays. People are being dropped from insurance as soon as they become sick.

Insurance reform is not just needed in health care. It is also needed in property insurance. I'm hoping Congressman Gene Taylor supports health care reform. By doing so, he can garner interest in the insurance reforms he has been proposing since Hurricane Katrina.

We need debate on this issue not blind rage. Screaming at your Congressman and throwing a temper tantrum doesn't alleviate the problem.
Posted by shira at 4:41 PM No comments:

Visit msnbc.com for Breaking News, World News, and News about the Economy

There are some great leaders in our country's history. Thomas Jefferson had great vision when he made the Louisiana Purchase. Abraham Lincoln had the vision of keeping the country united as well as abolishing inhumane slavery. Theodore Roosevelt had the great vision of preserving wild and undeveloped areas for future generations and our national park system was created.

Franklin D. Roosevelt had the vision of helping those affected by the Great Depression and many social programs were put in place. These programs helped people from starving to death and helped create jobs. He served a record four terms of office and led our country out of the depression and through World War II.

Dwight Eisenhower saw the need for a road system in which our military could travel the vast distances of our country without being bogged down. Thus, the interstate systems was created.

John F. Kennedy had the vision of us going to the moon. He set our country on a path of technological discovery has not been reviled. Because of his vision, the US developed computers, cell phones, ceramics that are used in our vehicles, satellite phones, and so many other modern conveniences we take for granted today.

Even one of the presidents I despise most, Jimmy Carter was a visionary. He saw the need for us to develop forms of transportation and power needs that were not so dependent on foreign oil.

The Federal government had to borrow money for these visions of America's future to proceed. In fact, the American Revolution was fought on heavily borrowed money from France and other European countries. Some funds were borrowed from individuals.

Some of the Founders were dismayed about all the borrowing but it was a tradition most of the Founders from Southern states were used too. Jefferson and other Southern leaders had vast personal debts.

What these visionaries understood was that these plans for the future cost money. In many cases taxes were raised and our country was heavily in debt. At one point after the American Revolution, it seemed that our country would be swallowed up by the weight of the debt. But one thing these visionaries had in addition to the country's future growth was courage. As did the people they led.

Now, our country seems to be filled with those that are so fearful, they are willing to give up their rights and sadly, not have any visions for the growth of our country. We've seen what Reagan's trickle down economics have led to: More and more people having to use credit cards for basic needs such as food, jobs flying oversees, less deregulation leading to higher bills on electricity, telephones, etc. and most alarmingly, a shrinking middle class.

Our country is at a crossroads now. Millions of jobs lost have to be replaced. Our country needs to face a new way of getting from here to there as the price of fuel goes. And as President Obama has proposed, we can create jobs in an effort to make our country less dependent on foreign oil. We can overhaul our medical system ins which premiums continue to rise while at the same time, we have less coverage.

Is this going to take money and debt? Yes. I believe in our country and I believe that working together toward our future can help everyone. We just have to have the same courage shown during other great times of vision.
Posted by shira at 12:09 PM 3 comments:

It's time for your weekly dose of Haveil Havalim:228.
Posted by shira at 11:47 AM No comments: