You really don't get used to it. You learn to cope and how to grieve and still carry on day to day. I still mourn all the people Katrina killed and the things that were destroyed. I have also found it awesome the number of people who came down to the Mississippi Gulf Coast to help us rebuild.

But I can still marvel at pelicans floating in the air while the sun sets. This and the smiles on family, friends, and strangers keeps me going.
Posted by shira at 9:13 AM 1 comment:

I've become very disheartened in the direction the United States has been going since President Bush was president. At the time, I agreed with some of his policies. I did protest the invasion of Iraq but once troops were on the ground, I fully supported them. In an effort to understand the Islamic faith I began reading a website by Robert Spencer. He equates all Muslims with the radicals. I stopped reading after I had emailed him a question regarding Muslim prayers. In it, I said you gain a lot of understanding by a faith's prayer. I never received a response from him and this led me to believe he really wasn't really an expert on Muslims.

After 9-11, Americans, myself included, seemed content to just forget about all the things that used to make us a beacon of freedom for those oppressed by intolerance because of religious and political beliefs. One good President Bush did do was state over and over that the vast majority of Muslims do not believe in the cause of the radicals who flew the planes into the Pentagon and the World Trade Center.

These laws can be changed. What cannot be changed is the torture that was employed in order to gain information from captives. It used to be that the US was the one country where torture did not occur. Fears led us to torture and the imprisonment of detainees.

Now fears, anger, and hate-mongering are being fueled across the country by those who do not believe in the 1st Amendment. Protestors in California, Tennessee, and New York are protesting the building of mosques and religious centers. I try to be understanding of those who are protesting the Islamic center close to Ground Zero. There is a mosque already there. But I think a lesson can be learned from the Pentagon. A prayer chapel was built in the Pentagon in the area where the plane from that awful day flew in. Different religious use the chapel including Muslims.

We can keep the above image in our mind as standing for the ideals of our country or we can be: 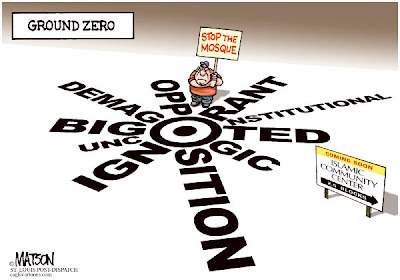 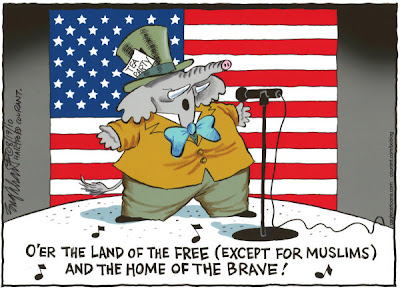 We are the United States of America. Let us remain the home of the free and the brave and not let our fears get the better of us.
Posted by shira at 11:45 AM No comments: