Waiting to how bad the oil spill will be is almost as bad as waiting for a hurricane to hit.

Five foot waves are overtopping the protective booms. The oil now drifting into the South Pass of the Mississippi River. The oil is expected to reach the Mississippi Coast on Saturday. I'm sickened by the thought of the potential loss of wildlife. Once the oil hits the marshes, it can linger for decades.

Click for more on the efforts to contain and clean the oil spill.

This is going to be bad. We were just starting to see some positive recovery from Hurricane Katrina. This oil spill will affect everything from the shrimping industry, shipbuilding, casinos, and tourism.

NOAA forecast graphic
Posted by shira at 2:11 PM No comments:

Sit down like adults and discuss political issues.
Posted by shira at 2:49 PM No comments:

End Socialism in the United States!!! 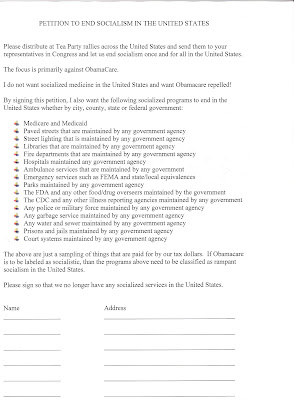 Click on image for a larger view.
Posted by shira at 12:14 PM No comments:

The very first Admendmnet listed in the Bill of Rights is this:

Congress shall make no law respecting an establishment of religion, or prohibiting the free exercise thereof; or abridging the freedom of speech, or of the press; or the right of the people peaceably to assemble, and to petition the Government for a redress of grievances.

There has been a growing trend in our country to call it a Christian Nation. This flies in the face of ideals and principles our founding fathers had in mind when this amendment was added to the Constitution. It was a very radical idea at the time for there not to be a state religion. Great Britain's state religion was the Anglican church. Many European countries state religion was Catholicism.

When colonies were first formed in this country, many of them were founded by those who were fleeing persecution. Our country has long served as a beacon of freedom for those who just want to be able to live their lives peacefully and to worship in freedom.

Muslim women wearing hajib mingle, Christian fundamentalists women wearing long sleeved shirts and skirts, and those in bikinis all mingle at the beach.

These images are at the very essence of religious freedom granted in this country. Sure, I've had those who tell me to get out of store when my Magen David is seen. But those instances are few and far between.

I believe that this is what the founding fathers had in mind when freedom of religion was guaranteed as a right.

I believe that efforts to bring prayer into school or forcing school children to sing Christmas carols eats at the heart of our personal freedoms.

If we were to reinstate school led prayers, which prayers would be chosen? Would it be the Nicene Creed? Would it be the Shema Yisrael? How about the Hindu morning prayer to Saraswati? Or the Muslim fajr? Or the Wiccan prayer of daily thanksgiving? Or how about an atheist stating there is no god? To make it fair, wouldn't each child of each religion or non-religion have to be given a turn?

Religion or lack there of is one's personal choice on how to live. The majority of people who live in the United States consider themselves to be Christian. They are free to worship as they choose. So is everyone else. It is in the Constitution and the separation between religion and state must be preserved so that everyone can continue to have religious freedom.

Join and Blog Against Theocracy.
Posted by shira at 11:31 AM 4 comments: