Though it seems to recede further and further from people's minds, the Mississippi Gulf Coast was devastated by Hurricane Katrina. Biloxi's Historic district took a big hit. The historic Magnolia Motel/Mardi Gras Museum still has to be repaired. Mary Mahoney's Restuarant opened within weeks. The Train and Toy Emporium re-opened soon after Katrina hit. But the little shops filled with the works of artisans and artists from Mississippi has been slow to rebuild. With one exception: the art studio of Bill Johnson. Mr. Bill has been at Croesus street for over 25 years. He is 88 years old and has been repairing his studio. He does a little painting and uses off-beat materials. He is using Styrofoam to carve coastal themes and it looks very interesting. He is also etching terra cotta tiles. His phone number is 228-435-9134.

Here he is in front of his studio working on some of the etchings:. 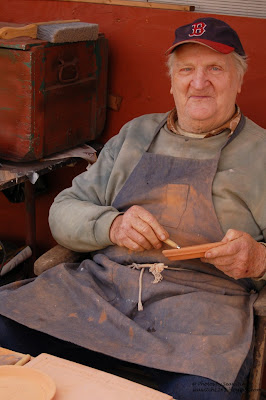 Some of the work he did while I talked to him: 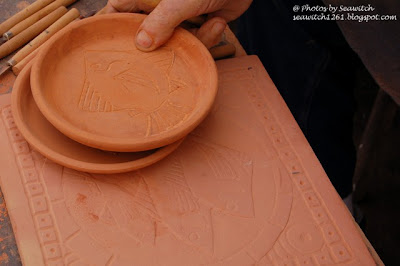 The only proclamation on his studio: 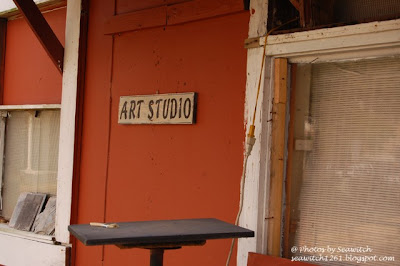 Another interesting shop I visited was Rue Magnolia Pottery. Two sisters and a friend opened their shop in October of 2008. It is filled with fun items like belly-button mugs that have a piercing. One of the sisters creates unique ceramic jewelry while the other creates fun and colorful art pottery. Their phone number is 228-435-2828. 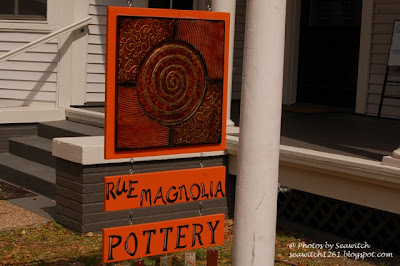 One of the pieces titled Fin-Fin. It is named after the notorious diet drug: 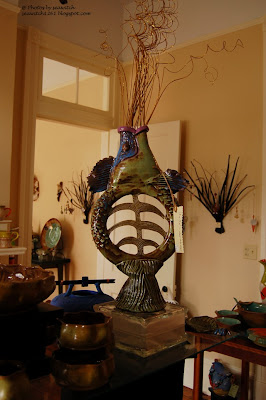 A lot of the pieces have vivid colors such as this star fish with a background of blue: 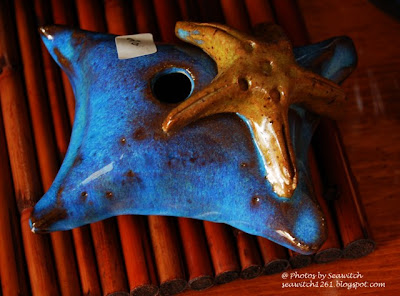 I liked this ceramic doll of a mother holding a child: 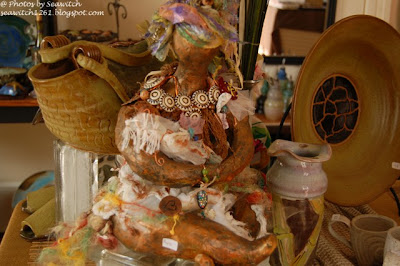 There are some unique creations in the pottery shop.

I was very excited about the new art co-op that opened at 626 Water Street. It hasn't been open very long. The co-op consists of photographs and artists from the Mississippi Gulf Coast and Hattiesburg. I asked permission to take photos so I'm unable to show-off some of the amazing talent in the co-op. There is everything from abstract art to Impressionistic style with everything in between.

I hope you will visit each of these places as well as some of the other businesses that have opened up shop. It is good to see this historic area coming back to life. Some of the buildings in this section were built in the 1790's and there is a lot of unique architecture.
Posted by shira at 2:14 PM