The Day We Fight Back: NSA Stop Spying on US

When the the PATRIOT Act was first purposed, I wrote to my Congressmen and asked them to please not sign it. Sadly, they did. And the Congressman Steven Palazzo has voted to renew it. This act, along with the War on Drugs has eroded our essential liberties of unreasonable searches and seizures. A few inroads are being made regarding the War on Drugs. I still cannot fathom why a majority of US citizens thought it was a good idea for law enforcement to be able to seize a person's property with just a suspicion of drug activity with no legal proceedings to justify the seizure.

The greatest disappointment I've had with President Obama is his insistence that the PATRIOT Act is necessary in order to fight against terrorism. It is the same old canard that convinced many in the US that we needed the PATRIOT Act in the first place. We don't. We US citizens shouldn't allow are laws that protect us from unreasonable searches and seizures by the government to continue.

Today is the day we fight back. More information is here. If we continue to allow fear to erode our Constitutional rights, soon we will have none. 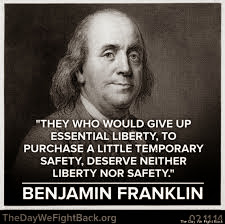