Proud to Be a Liberal 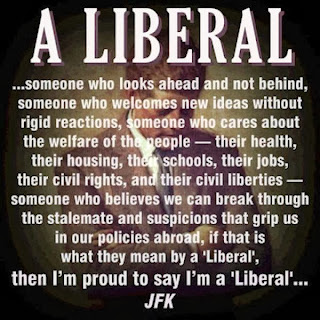 I'm disgusted by Senator Ted Cruz, failed ex-Governor Sarah Palin, Speaker of the House John Boehner, Congressman Paul Ryan, my representative Steven Palazzo and the TEA Party who seemingly want to destroy our country. I like living in a representative Democracy. They don't even appear to know what a representative Democracy is. They are destroying our country by playing dangerous games. Some Republican Congressmen have even stated that if we default, it will not harm our country. Think of it this way, if you or I were to default on our car note or mortgage, do you think the banks will just idly stand by? Do you think it will become more difficult to get a loan? If you are able to get a loan or credit after defaulting, the interest rate you pay will go up. This is what our country is being led to. The GOP controlled House of Representatives is wrecking economic havoc on our country. They are fiddling like Nero did and our country will suffer greatly. We need to clean House in 2014.
Posted by shira at 5:19 PM No comments:

Remember Who We Are This Independence Day 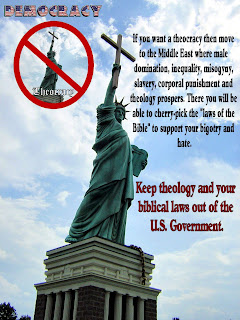 Email ThisBlogThis!Share to TwitterShare to FacebookShare to Pinterest
Labels: Fourth of July, Independence Day, representative democracy, say no to theocracy

On March 26, 2013, a group of around 150 gathered on the beach in Gulfport MS for a bonfire and candle light vigil so that all Americans can enjoy equal rights. Currently the US Supreme Court is hearing debating on the issue of gay marriage.

The first person I introduced myself to was Sara Bell. In January, she and her wife tried to apply for a marriage license at the Forrest County Circuit Clerk office. They were denied. It was heartbreaking to her and the other stories at the vigil. All they want is the freedom to spend their lives legally with the person they love. Nine states have legalized same sex marriages.

How can we, as Americans, deny the right to marry to others? It wasn't so long ago that bi-racial marriages were considered immoral and a threat to "traditional" marriages.

Thanks to groups like Campaign for Southern Equality there was hope among those gathered at the vigil. I hope Rose and Lynn and the many other couples there will soon have equality. 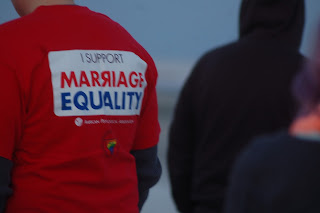 It seems as though everyone in the South defends the 2nd Amendment loudly and argue against "Big Government" interfering in their lives. Well the DOMA Act and many state laws do just that. Those other amendments are just as important. The 14th Amendment reads thus:

It seems states like mine are denying equal protection to gays who wish to marry. It is time for this discrimination to end.
Posted by shira at 6:14 PM No comments:

The United States used to dream big. With the technology NASA needed to send men to the moon, we as a country derived great benefit from the government funded program. It led us to become the technological leader.

Last night as I was watchingFor All Mankind, I couldn't help but reflect on the difference 50 years have made since President Kennedy gave his speech on to the moon:

"No single space project in this period will be more impressive to mankind, or more important for the long-range exploration of space; and none will be so difficult or expensive to accomplish," Kennedy said.

The president cautioned Congress that the cost would be significant, more than $9 billion in 1960s dollars. Congress accepted the challenge.

Back then, Congress saw the benefits of the space program. Sadly, the same cannot be said for the Congress we are saddled with today. The current science committee is filled with people like Representative Paul Broun who doesn't believe in the evolution, embryology, or the Big Bang Theory. He calls them "lies to keep him away from his savior".

I wouldn't be surprised if he would say men didn't go to the moon because the moon is made of cheese. NASA is still strong and Curiosity is still exploring in spite of Congress.

We live in a world today in turmoil. We need more peacemakers. Sadly, they seem to be the ones silenced.
Posted by shira at 5:19 PM No comments:

Living in Mississippi can be a challenge. It is a very conservative state. One that elected Governor Phil Bryant who said this:


"Even if you believe in abortion, the hypocrisy of the left that now tried to kill this bill, that says that I should have never signed it, the true hypocrisy is that their one mission in life is to abort children, is to kill children in the womb."

No Mr. Bryant, we leftists do not have as our life's mission to kill children in the womb. Our life's mission is to guarantee that a woman has the right to make private medical decisions about her body. It is our life's goal that women have access to birth control so they can make private decisions about how many children they want. In short, it is keeping BIG GOVERNMENT out of a person's medical decisions.

He also supports a bill for school prayer. It sounds innocuous. Students leading prayers, what harm can there be in that? For one thing, the students are chosen by the administrators of the school and people of different faiths or no faiths will have to listen to largely Christian prayers at mandatory school assemblies. This bill seeks to sneak around the establishment clause of the 1st Amendment. Children can already pray in schools. This bill is unnecessary and will just cost taxpayers more money as will the abortion bill passed.

It is maddening sometimes talking to others about these issues. You mention the 2nd Amendment and that's got their attention. You mention those pesky other rights and it's crickets.

I think the mind-set of our legislature is reflected in Republican Senator Tony Smith who was able to get passed what is called the anti-Bloomberg bill. It proposes that restaurants do not need to list ingredients or calories and was in response to the 32 oz soda ban passed and then knocked down in New York city.

See he benefits greatly form this bill as he owns Stonewell's BBQ and catering. He proposed legislation that benefits him another way. He voted to require schools to have longer vacation times.

It's not any wonder that Mississippi ranks last in education and in so many other areas. But a lot of Mississippians keep voting for these people even though it's not in their best interest. Just shout the words "states rights" and "gun control" and you have the majority of votes. And the effect is depressing.

The following chart is from the Bureau of Labor Statistics :

The majority of the 1,300,000 workers in Mississippi make an average of $200 less a week than the national average of workers across the country. That works out to be $260,000,000 in less earnings. This a legacy of Governor Ross Barnett who made Mississippi a so-called "right to work" state in 1960. Our current governor and legislature continues the grand tradition.