You may have seen the commercial for an office supply company. Someone in the office is in a panic and someone else brings out a big red button with the word easy in white letters. The button is pressed and everything is taken care of. If only there was something like that to help my ravaged Mississippi Gulf Coast!

Much rebuilding has been done but at times the task seems daunting. It is not merely trying to replace the homes and businesses washed away: It is also wading through the endless maze of new building codes, new zoning, new elevation requirements, trying to find insurance, material shortages, and rising prices.


It is also trying to save every scrape of historic buildings that somehow did not get washed and blown away by Hurricane Katrina. Each 100+ year-old that is restored is a cause for celebration. Each announcement that other historic buildings may be torn down is a cause for sadness. We lost Grasslawn, the Father Ryan House, the Dantzler House, Tullis-Tolando, and so many others.

There are two historic buildings whose fate is still uncertain: the downtown Gulfport Library and the historic Markham Building.

Countless hours of studying, research, and the introduction of children to the rewarding world of reading had been spent at the Gulfport Library. 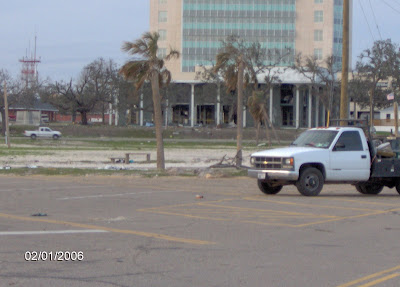 The Markham Building was a designated fall-out shelter. In the 1920's, it was a grand hotel and had been remade into a beautiful office building. Proms were once held.

The Markham Building is the white one in the background: 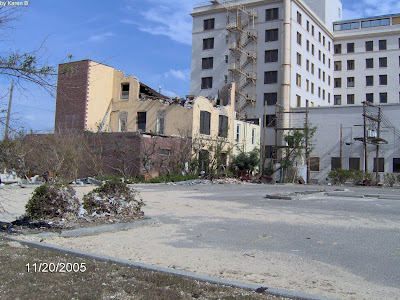 These two buildings represent the intangibles that were lost. How can you quantify memories?

After Hurricane Katrina, cities along the Mississippi Gulf Coast came up with rebuilding plans. These plans are grand and beautiful. But they leave out some important considerations: the people who live here. The plans call for transforming harbors and downtowns into showplaces. They also tend to forget the majority of those who utilized the harbors and piers before Katrina. The plans are not geared toward to the men and women who just want to go and fish after a hard days work. They are geared toward the rich.

And this brings up another problem: Housing for the working poor. Time after time, developers who are encouraged to incorporate affordable housing into their plans are voted against in council meetings. It is sad when the Regional Housing Authority has to sue a city such as Gulfport in order for affordable housing to be built. People are scared of the term low-income housing. What many don't realize is that many teachers, firemen, policemen, retail workers, and many others are included in the term low-income wage earners.

The plans for rebuilding are cities are beautiful and it would be nice for them to go into effect. But I worry that as in the case of housing, those who are considered the margins of society will be pushed further away. The plans for making our Coast beautiful should not and cannot neglect the service workers in the tourism industry.

I want nothing more for the ravaged spaces along the Mississippi Gulf Coast to be rebuilt. But the reality is, we cannot neglect the intangibles nor can we neglect our working poor, our disabled, and our elderly. We cannot neglect our neighbors and we cannot ignore the increasing numbers of homeless as the FEMA trailer parks are emptied.
Posted by shira at 6:45 AM

Well said! Unfortunately, the same phenomenon seems to occur everywhere--build for the wealthy.

We are a small group trying to save the Gpt Library. There will be a public meeting Thursday April 3rd at 4:00. We need all the help we can get.