A lot of people are focused on the supposed human rights violations Israel commits. A Google search on boycott Israel reveals a staggering 206,000 results. There is a great outcry no matter how Israel tries to protect her citizens. The latest insult comes yet again from the UN Human Rights Commission. It blames Israel for the terrorist attacks by Palestinians. They say the living conditions in Gaza are so bad, the Palestinians have no choice but to seek to murder innocent Israelis. But the thing is, those living in Gaza actually a higher standard of living than Egyptians.

Israel has wisely closed its border crossings into Gaza. And yet people claim Gazans are starving when enough flour flows in per day to provide almost a ton of flour for Gazan.

The Palestinians have been used for generations as political pawns. Treppenwitz points to an excellent essay that was printed in The Atlantic Journal. It pinpoints how Palestinians had become pawns in order to demonize Israel. This article was written in 1961. Much has changed since then. The rhetoric against Israel borders on the insane.

Today, Sderot suffered through another 11 Kassam rockets. These rockets may be crude and homemade but they have the desired affect: to create terror and to maim and murder. Some people say that since only x number of Israelis have been killed or injured by the Kassams, they don't really count. Try telling that to the relatives of those killed or injured.

In the past, Israel has been accused of cruelty for flying jets over Gaza. What of the citizens of Sderot who are bombarded daily and only have 15 seconds to seek cover after a warning? What of the parents in Sderot in fear for their children in school? Just this past year when Sderot schools opened, they were greeted with Kassam rockets.

I guess Israeli human rights do not count. And while the focus remains on Israel, others whose situations are so much more perilous than Palestinians languish.

Darfur is a well known example. Less known are those in Congo. 5.4 million have died there and many more continue to die.

China harvests organs from political prisoners. But I suppose that can be largely ignored since China will be hosting the Olympics. Wouldn't want to impose on the hosts and all that.

It used to big news about North Koreans starving. I haven't heard much about them lately. I don't think their situation has improved much.

And the world's silence on the situation in Burma is damning.

This graphic says it all: 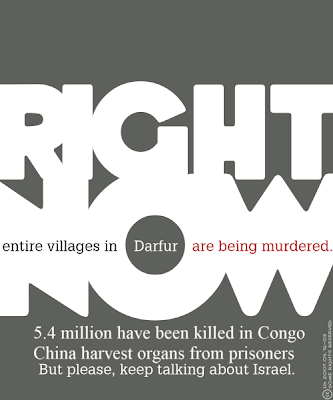 Shira, you are entirely missing the point. Darfur, China,and Congo are all Israel's fault. So, if we deal with Israel, all the other problems will disappear, including poverty, hunger, and global warming.

Face palm!!! How could I forget that logic!!!

People like simple answers, even when they don't really provide a real explanation.