Deep down, I knew Sergeant-Major Ehud Goldwasser and Staff-Sergeant Eldad Regev were dead. Part of me hopes their deaths were swift for the enemies of Israel do not hold to the Geneva Conventions when Israelis are taken prisoner. News reports indicate that the Red Cross played a part in the transfer of Regev's and Goldwasser's coffins. Where was the Red Cross when there was some small hope that these two were alive? And where are they for Gilad Shalit who is presumably still alive and in the hands of the "peace loving" and "gentle" Hamas?

Goldwasser and Regev were returned today. They arrived in coffins. They were kidnapped and taken as prisoners by Hezb'allah, The Army of god. Israel was universally condemned and many idiots held up signs proclaiming "We Are All Hezbollah Now". The Lebanese were held as innocent victims. Once again, a society should be judged on whom it deems a hero. The Lebanese hold Samir Kintar as a hero.

If you portray the killing of civilians as heroic, then we will surpass you in heroism. Don't cry to the world about your precious civilians and then prepare a national celebration to honor a monster who deliberately destroyed a family, and whose final act before being captured was to gleefully crush the skull of a small child against a rock.


If our soldiers won't enjoy the protections of the Geneva Conventions… neither will yours. A dead prisoner will be worth a dead prisoner in any exchange. If we run out of dead prisoners to trade, we will make more. As you've ably demonstrated today, live prisoners can be unapologetically turned into dead ones quite easily.


If this is the only way we can force our enemies to keep our POWs alive and to feel some accountability for their welfare… then so be it. Otherwise our long-neglected death penalty will be dusted of and employed without hesitation or sentimentality. And since those who attack us refuse to wear uniforms or insignia, Henceforth they will not be entitled to the niceties of a trial or POW status. Those we capture in the field will be summarily executed.

David, who wrote the above is very angry and I don't blame him. He is angry at the Israeli government. He is angry at all those who support and hold up as heroes those who murder who destroy families. Below is a picture of the Haran family Kuntar destroyed: 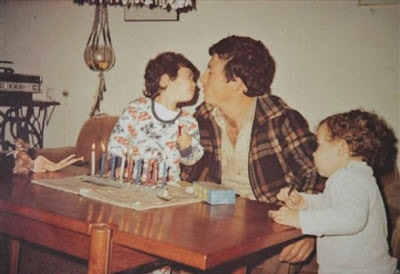 Not only is Kuntar hailed as a hero by the Lebanese, the Palestinian Authority views him as well. It shouldn't be surprising. Suicide bombers, those cowards who blow up buses, discos, and pizza parlors are held in high esteem and children are actively encouraged to grow up to be suicide bombers. Israellycool posted the following at his site:

Could it be the "ideal Palestinian prisoner" is one who sees nothing wrong with crushing the skull of a 4 year old?

The families of Goldwasser and Regev were hoping against hope their loved ones would return alive.

Cries of horror sounded at the Regev and Goldwasser homes Wednesday, as family members witnessed the TV broadcast of the prisoner exchange, in which the coffins of Eldad Regev and Ehud Goldwasser were shown being turned over to the Red Cross.

Eldad Regev’s aunt, Hanna, collapsed upon seeing the images of her nephew’s coffin and was attended to by Magen David Adom paramedics, which were standing by.

Murderers of children are held up as "ideal prisoners" and "heroes". And yet it is the Israelis who face not only enemies at its borders but also condemnation from church groups, academics, and the UN. Church groups such as PC(USA) and Methodists are still debating to divest from Israel based on "moral" grounds. Academics in Britain still hold yearly debates on boycotting Israel. The UN Human Rights Commission(the very name is an oxymoron)condemns Israel on an almost daily basis while ignoring Zimbabwe and the human rights abuses occurring in Iran, Saudi Arabia, Egypt, and other places around the world.

Who are the lovers of peace? Is it those who idolize murderers such as Kuntar? Or is it a beleaguered country which provides medical care, food, water, and electricity to those who have sworn not to stop murdering until "Palestine is free from the river to sea"?

Lebanese terrorist Samir Kuntar, whom Israel has agreed to free as part of a possible prisoner swap deal with Hizbullah, has vowed to continue engaging in terror after his release.

He has a round-up of others blogging about this travesty.

Jack has And Murderers Are Set Free

Elder of Ziyon has All of Lebanon Celebrates Multiple Murderer

There are a lot of things that could be said against and about the travesty of the current government, about the way the negotiations with Hezbollah were carried out, about the dirty politics and dirty politicians. One thing, however, should not be forgotten - it is not about politics, not about national pride and even not about the grieving families. It is about the soldiers.

As for Samir Kuntar, who will become a most celebrated hero in Lebanon after crushing a Jewish baby’s skull against a rock: even in the pain we all feel because of the necessity to release him, there is a silver lining. Look at the people who celebrate release of one of the most inhuman murderers and learn. Look at the sweets being handed around to the crowds in Gaza, at Lebanese president and prime minister receiving the monster, at Shiites and others lining the roads on the way to the vermin’s family house, at Palestinian president Abu Mazen congratulating the “hero’s” family. Look, learn and remember.