It's a Cultural Thing

When Michael Vick was arrested for dog-fighting, Whoopi Goldberg made a comment about dog-fighting being a cultural thing. She was castigated for seemingly trying to defend the vileness and cruelty inherent in dog-fighting. She said that cock-fighting is culturally acceptable in places like Puerto Rico and dog-fighting is wide-spread in the Southern states of the US(hey Whoopi, dog-fighting exists in the Northern states as well). 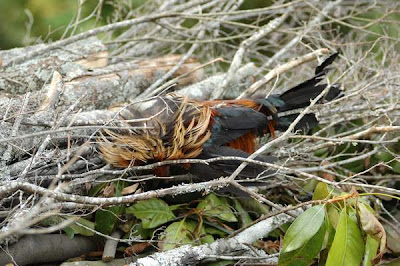 Recently, 9 men in Clinton Mississippi were arrested for having cock-fights. The above picture is one of the poor animals that died as a result of cruelty and for the profit of the men who ran the fights. These men and others across the country who run cock fights and dog fights are rightly condemned for the cruelty they choose to employ.

Whoopi's statements about Michael Vick being a cultural thing is not an isolated incident. It has become politically incorrect to judge other cultures. Women in Saudi Arabia have many restrictions against them. They are treated as second-class citizens by the modesty police and in courts of law. The symbol of their second-class status is the veil they must wear. They do not have the freedom to choose to wear the veil. It must be worn.

Women in Jordan, Gaza, the West Bank, and increasingly in Europe are murdered in so-called "honor killings". In Arab Islamic countries, those murderers face little more than a slap on the wrist. It is a culturally acceptable defense in those countries that women can be murdered for daring to date someone the family doesn't approve of, for becoming pregnant, etc. Do we, in Western countries, dare condemn those murders? We must!!!

We must also condemn the use of terrorism committed by the Taliban, Al Queda, Hamas, Hexb'allah, Islamic Jihad, the terrorists factions of Fatah, and so many other groups. We must condemn in no uncertain terms the bombings of embassies when false outrage is stoked against political cartoons about Mohammed. 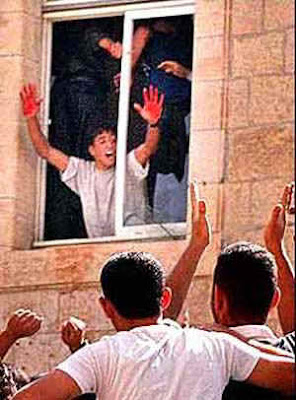 You remember that picture at the start of the Second Intifada. We must condemn those who can literally tear living human beings apart with their bare hands. Instead of trying to seek justification for such brutality, it must and should be condemned.

Where does such hate come from? Some try to justify the hatred because of actions by the Israeli government. I do believe it is a cultural thing. From Iran to it's barbaric stonings of women and it's hanging of teenagers, to Saudi Arabia with it's 100 lashings to a rape victim: the barbarity is a cultural thing. The barbarity is interweaved with Sharia law. Because of "cultural sensitivity", we are not to criticize those aspects of Islam which in some countries are barbaric. There will be barbarity like this until there is widespread condemnation of the text books used by Hamas and the Palestinian Authority.

This multiculturalism and "cultural sensitivity" is making a mockery of the laws of justice in Europe:

In the UK, Islamic Sharia law courts, where the laws of evidence are more lenient, now operate as an alternative to the legitimate courts of the British government, according to The Telegraph, undoubtedly encouraged by the climate fostered by idealists such as the ruling Labour Party, which had insisted for many years that their country is “multicultural.” In Germany, the judge of a German court cited the Koran in rejecting a Moroccan woman’s petition for an accelerated divorce due to domestic violence and death threats from her husband, according to the International Herald Tribune. While mainstream Muslim leaders, to their credit, swiftly condemned the ruling, the apparent alacrity with which the judge subordinated German legal principles to the Koran illustrates the paralysis of justice which could result from permitting cultural accommodation to become too ingrained. In France, philosopher Jean-Francois Revel has commented that the institutional reluctance to teach French to immigrant children in French schools has stunted the upward mobility of these immigrants, causing resentment which sometimes boils over into the youth riots we have witnessed in recent years. Homosexuals, in particular, comprise one group which has much to fear from the growing Islamization of Europe. In the Netherlands, attacks on gays have increased in recent years, mostly perpetrated by Moroccan youths, according to Radio Netherlands. In Iran, Sharia law calls for the execution of homosexuals. It may be ridiculous now to think that something like that could happen in western Europe, but such changes do not occur suddenly, and we only notice too late when things have gone too far, just as a frog submerged in a pot of cold water does not jump out of the pot if the water is brought gradually to a boil. 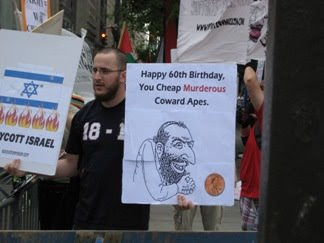 The above picture was taken at an Israel Day Parade held in New York. Whenever supporters of Israel get together, they are subjected to this. If this sign had referenced Palestinians, it would have been splashed across the news world-wide.

British academics call for the boycott of Israel on a yearly basis. Multiculturalism has led to an absurd and skewed vision of human rights.

It has sapped us in the West of being able to change the barbarity that exists across much of the world. We mustn't condemn Mugabe because European colonialists were in Africa. We mustn't criticize the Koran because it might led to riots. We mustn't draw political cartoons showing Mohammed because it is "insensitive".

How much more "cultural sensitivity" must we show? Criticism has the ability to make us change for the better. Multiculturalism is taken away the ability to bring justice to those who languish in prisons and in repressive societies because it is a "cultural thing".
Posted by shira at 7:13 AM