The outpouring of financial help and the number of volunteers that responded to Hurricane Katrina was awesome. And we appreciated it very much. Up along the Mississippi River and its tributaries, people lives are once again being overturned by flood waters. The Red Cross estimates it will need $45 million to help those impacted by the flood. Thus far, $5.5 million has been raised. We can do better than that.

The Mississippi Coast Chapter in Biloxi and the Southeast Chapter of Mississippi in Pascagoula are gearing up to send Red Cross volunteers to the stricken areas. Local churches are collecting donations. The city of Gulfport Mississippi is going to send relief supplies to Gulfport Illinois. Why, when we ourselves are still rebuilding?

Without electricity in late summer 2005, the daytime heat was smothering and the nights were dark. Chain saws were buzzing in every Coast neighborhood and just when Katrina survivors could eat not one more canned meal, the red-and-white truck seemed to pull around the corner.

"Those vehicles will be doing the same thing up there, delivering hot meals to people who need them the most," Brent said. "Our volunteers will deliver two hot meals a day to all of the affected neighborhoods."

I was fortunate that I didn't have damage to my home. The place I worked at was virtually washed away. The picture below shows what was left: 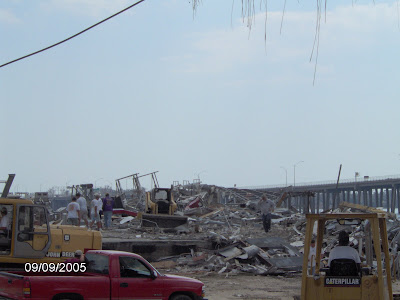 The vans of the Red Cross and the Salvation Army helped tremendously. They brought their comforting warm meals. Their smiles, as much as the meals, boosted our morale. 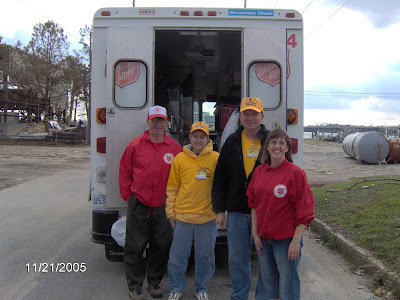 Let's give them a hand up. Those who face the task of stripping their homes and businesses of sodden furnishings should have the comfort of those meals and smiling faces. Let's help them out.


Let's fill those empty coffers. Our heartland has given so much to this country. It's time to give something back.
Posted by shira at 6:20 AM