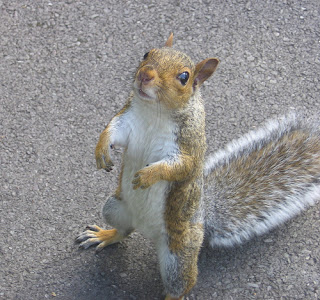 I have a few that nest in some of the oak trees in my yard. I suppose I should count myself fortunate that the only bad incident I've had with any of them is when one of my cats had injured one. The squirrel bit me as I was picking it up to take it to the wildlife rehabilitation center. Like I said, I feel fortunate, especially after a squirrel in New Jersey managed to set a car on fire.

I hate to run over animals…and I really hate it on a motorcycle, but a squirrel should pose no danger to me. I barely had time to brace for the impact.

Animal lovers, never fear. Squirrels can take care of themselves!

Inches before impact, the squirrel flipped to his feet. He was standing on his hind legs and facing the oncoming Valkyrie with steadfast resolve in his little beady eyes. His mouth opened, and at the last possible second, he screamed and leapt! I am pretty sure the scream was squirrel for, “Banzai!” or maybe, “Die you gravy-sucking, heathen scum!” as the leap was spectacular and he flew over the windshield and impacted me squarely in the chest.

And that was just the beginning in this epic tale.
Posted by shira at 11:53 AM

Email ThisBlogThis!Share to TwitterShare to FacebookShare to Pinterest
Labels: Animals

I hate them.
I hate them.
When one's outside our back door, I'll slide it open and say "squirrel stew." And they run away. (They don't know that squirrels aren't kosher, but when they hear a carnivore say "stew," they get very nervous.)

Oh why do I hate them so much?

They eat through the lids of our plastic garbage cans. Last year one ate through the tubing that supplied the gas from the tank to our grill.

Yesterday, I inadvertantly flattened one. It seemed like it was trying to evade the car but apparently succeeded in running right into the path of the tire.

I might hate them, but I really didn't want to kill it.

I have one that scolds me every time I go outside.

They tend to leave my garbage cans alone because of my cats. One of my cats succeeded in killing one yesterday.

The squirrels are a pain with my birdfeeders.

My dog Max loves to chase the little darlings. It is his mission in life.

My Hubby desparately wants a BB gun for target practice in our back yard. We have your run of the mill brown squirrels and some sassier black squirrels. They are all evil.